A review and summary of Mind Change, a book which makes the case that our use of digital technologies may be changing our brains and our thinking.

“How digital technologies are leaving their mark on our brains” 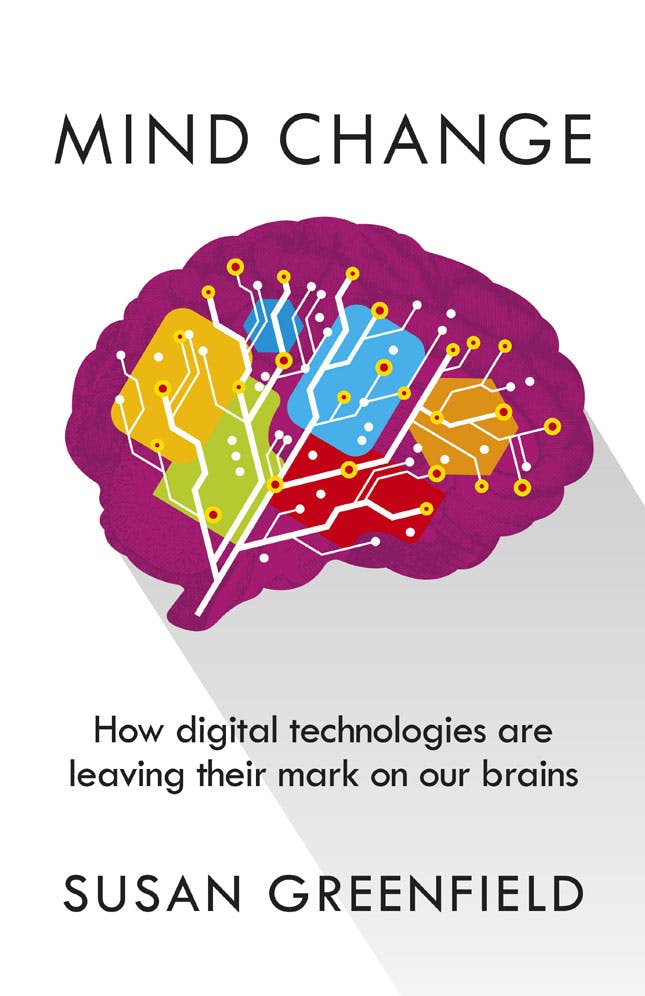 Buying via our affiliate link supports mindful.technology with a small commission from your purchase.

In Mind Change (2014), Susan Greenfield compares the changes to our brains in the digital age to the climate change crisis. This sounds exaggerated, since climate change has the potential to devastate life on earth. However, she makes no claims about similarity in the severity of the change, but rather that “Mind Change, just like climate change, is global, unprecedented, controversial and multifaceted”.

Like with climate change, there has been a lot of push back against the concept of Mind Change. Greenfield, as a prominent neuroscientist in the UK, sits in the House of Lords. She describes how, after raising the possibility of the digital environment having effects on the human mind at the House of Lords in 2009, she started to receive criticism which went beyond the “professional criticism” she was used to into “personalised animosity”.

Although the press didn’t help by reporting her speech with overblown headlines such as “Baroness says computers rot the brain”, she feels that a reason for the hostile reaction was because “people felt threatened or in some way undermined”. This leads into another comparison with climate change: like the early green movement, people who raise questions about the impact of technology on our brains are seen as weird eccentrics. And like the green movement (which is now mainstream and influential), there is potential for Mind Change to become a bigger issue as the impact becomes more clear over the years. I think she has a point: perhaps in 2009, when Twitter was just over a year old, this was something that few people were thinking about, but now, a decade later, it seems to be a more mainstream concern, especially amongst parents who need to make decisions about what is a healthy use of digital technology for their children.

Greenfield has been subject to criticism from academics. At the core, the criticism seems to be that she moved away from proper scientific practice and now frequently proposes theories in public without publishing scientific papers so that the evidence and inferences can be scrutinised. In reading and reviewing Mind Change, I have been aware of these criticisms, but still found the book to be a helpful contribution to the space. (Those who want to explore these criticisms further can read the Guardian’s extremely critical review.)

I did not sense that the book was anti-technology. The core message is that heavy use of digital technology does have implications on the brain, some of which are concerning. This is not a controversial message: anything taken to extremes can be harmful, and there is evidence that significant segments of the population have taken digital technology use to an extreme. Most of us see this in our personal experience too: even if we ourselves do not struggle with technology use, we’ve all encountered people who seem to be addicted to their phones.

My biggest criticism of the book is not that it is not scientific enough. It’s quite the opposite: in being very careful not to present certainties where the evidence is inconclusive, it does not set out a clear and interesting narrative. The writing style feels quite academic, and like when reading a scientific paper, I often found myself having to re-read sentences 3 or 4 times before I understood them. For example, this gem:

Perhaps the greater appeal of the printed book, but one that will not be at a premium when the more everyday workaday considerations of money and convenience are taken into account, is its cultural symbolism.

…I know my attention span might be a little impaired after all these years of using digital technology, but I still have no idea what that one means! It’s not quite as difficult a read as a scientific paper, but perhaps with a bit more editing it could have been a smoother read.

After setting out the concept of Mind Change, the book continues with an overview of how the brain works and comes to constitute the mind. Much of this went over my head, but key is the idea that due to “neuroplasticity” the brain adapts to the environment, and therefore the digital environment could lead to significant changes in our brains, our minds, and our thinking processes.

The book then covers various facets of Mind Change problem in detail. Social networking gets a lot of attention, with a discussion of the impacts on our identity and relationships. This is important: though most of the time I’m not a heavy user of social networking sites, at times I’ve found myself using them to the extent that I can no longer concentrate on say, reading a book.

One chapter is dedicated to web surfing. For me this is the most interesting facet of Mind Change, and perhaps more coverage should have been dedicated to this. Surfing the web can clearly be very useful, as this activity gives us access to a virtually unlimited information resource. But though it is more useful than video games or social networking, it also brings concerns. For example, on the web, we tend to skim rather than read. Also, with access to unlimited information, there’s a danger that we over-consume information, because historically information was scarce. In a similar way that people tend to become obese with an abundance of food, our consumption of information can also be unhealthy when we have an abundance of information.

Throughout these core chapters covering social networking, video games, and surfing, I found it difficult to get through the book, partly due to the lack of a strong narrative linking the nuggets in the book together. Towards the end of the book, in the final three chapters, it gets a bit easier to follow. Ironically, it gets most interesting when Greenfield addresses the importance of narrative and the lack of sustained narratives in the digital environment of social media posts and hyperlinks.

The book ends with 70 pages of notes and references. It would therefore be a good introduction to some of the scientific literature on this topic.

It’s fantastic that Susan Greenfield has raised the concerns in Mind Change. In raising awareness of this topics over the last decade, she has been an important voice on an important topic. However, Mind Change is far from the most captivating read, so I would not recommend as an introduction to the topic (perhaps try Future Minds), but for those wanting to dive deeper and perhaps start exploring the scientific literature, it’s worth a read.